What Is A Dalmatian Patch? 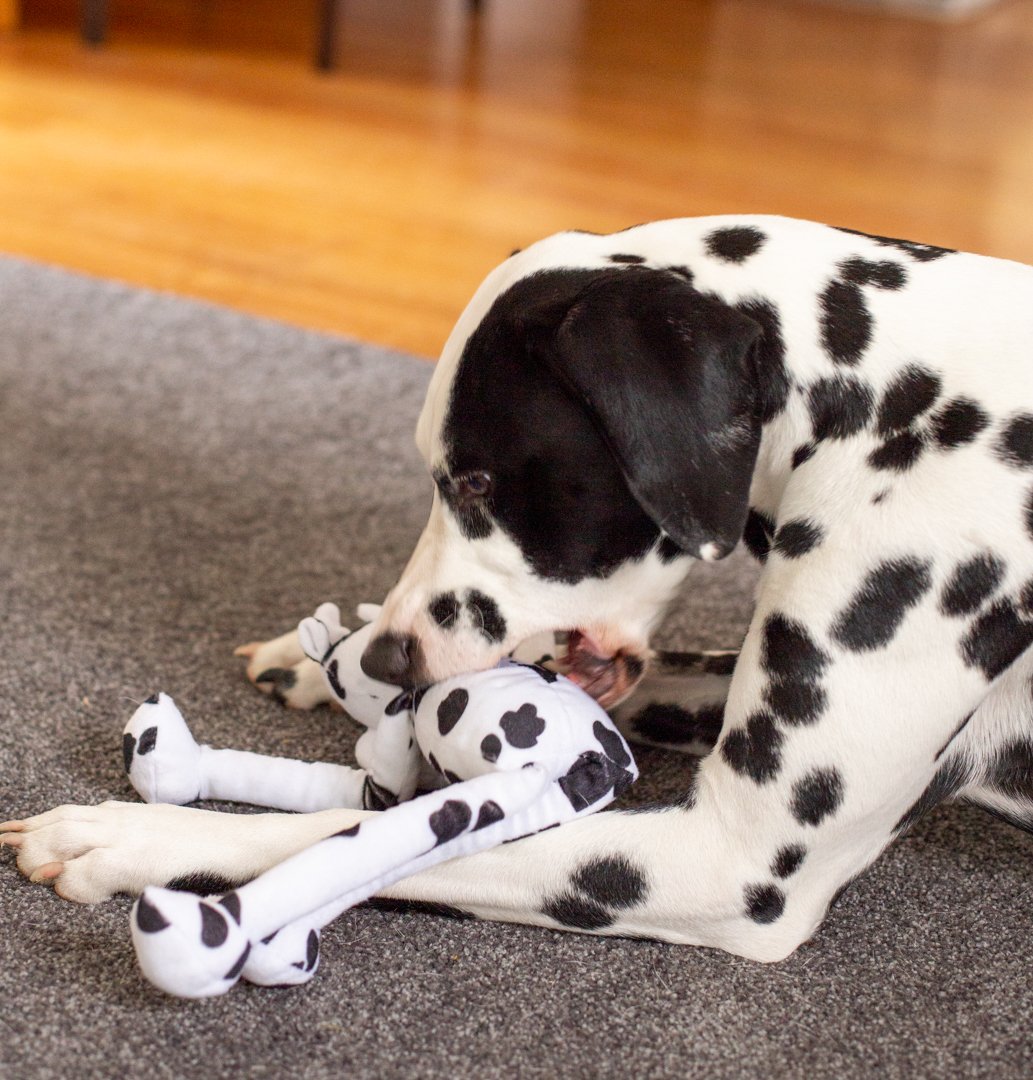 A patch is a clearly defined section of completely black or liver fur, not to be mistaken as a number of overlapping or connecting spots, it is one large area with no white fur at all (any white hair would suggest it was in fact a clump of spots, not a patch).

Patches are found in about one in ten Dalmatian pups, surprisingly common and an increasingly popular trend. Breeders do not selectively breed for patches because they are a fault and do not hold true to what the Dalmatian breed should be. Any responsible breeder would not be breeding for patches to ‘make a sale’ or sell pups with a patch for a higher price because they are more popular, both of these would be wrong and not fair on the Dalmatian breed. With a reasonably common instance of patches, the best thing you can do is choose a few breeders that you like based on their dogs’ temperament, spotting, body size and conformation etc. and simply put yourself on a list to wait for a patched pup, if that is what you really want. Having a patch (or any aesthetic quality for that matter) should never trump careful selection of your new pet, especially when it comes to temperament. The right dog is there, you just might have to look a little more and wait a little longer as how a dog looks plays no role in the personality of your pet.

Also be prepared, you oddly get many people who ask if your Dalmatian is pure, just because they see a patch, even some who ask what breed it is (isn’t it obvious?). But perhaps this is just because the kind of Dalmatians shown on television or in the media tend to stray away from the non-standard patched dogs.

Patches found on Dalmatians may be in the positions of:

Ears: Patches in varying sizes over one (sometimes both) of the ears is the most common type of patch. Generally this patch will cover some of the side of the head too. Like having a completely black nose, this type of patch can be an acceptable breed standard if it is restricted to the ears only, it is pretty common to have mostly black ears (and a good thing when it comes to reducing sunburn risk). Strictly speaking, a group of spots is preferred to having a patch. You can tell if a black ear is a patch or just lots of joined spots by flipping the ear over and looking at the fur on the underneath side (good luck getting your Dal to sit still!). If the hairs on the underneath of the ear are all black, it is a patch, if there are any small number of white hairs scattered, they are a group of spots. It is noticeable on the patterns on the skin of the ear in this way too. Historically, breeders had been instructed to put-down patched pups, which is absolutely unnecessary and awful, considering having a patch is not linked to any negative conditions whatsoever (as originally claimed). In fact, recent studies of more than 25 years of testing data suggests that having a patch on the head has a significantly decreased risk of being deaf in that ear.

Pirates: Perhaps the most sought after, pirate or monocle patches are over one eye. The patch can be quite variable in size and be on one eye or on one eye and most of one side of the head, even extending to the ear.

Tails: Having a dipstick is perhaps the most peculiar patch, but definitely gives the dog a lot of character. Most people know this kind of patch from the Dalmatian Dipstick in the Disney movie, named as such for the patch on his tail.

Love hearts: It seems trendy lately to find Dalmatians with ‘love heart’ shaped noses or spots, but this is simply two to three spots overlapping each other. It is not difficult to find love hearts amongst a Dalmatians fur, if you look hard enough.

Nose: It is a desirable feature for Dalmatians to have a spot completely covering their noses, both as a breed standard and for the obvious advantage of avoiding sunburn. Puppy’s spots do increase in coverage as they grow, so it is quite possible that even if initially there is some pink on their nose that spots on the nose will expand over the whole nose area. Otherwise dog-specific branded sunscreen and just being mindful of exposure during summer is an easy fix.

Random patches: Other areas that can have patches are just about anywhere. Patches on the torso and legs are not as common as those listed above though and are subject to disqualification in breed standards, rather than just frowned upon.

Multiple patches: Having more than one patch, especially on the torso region, is not as common and tends to indicate the dog might not be a pure-bred Dalmatian. This does not mean they can’t be pure, it does happen, but multiple patches tends to be a result of normal piebald spotting seen in other breeds, or more common in Dalmatian mixes.

Windows: Large, noticeably spotless areas on a Dalmatian, areas that are completely white, are known as windows. It is a result of spots just not being evenly distributed and missing in that area, leaving a gap of white fur. It tends to happen on the torso and is only really a concern for those who show Dalmatians in point deductions for non-even spot distribution.

Having a Dalmatian with a patch is considered a flaw or fault in this breed for showing purposes, but patches are considered a cosmetic flaw only, are completely harmless, reasonably common and not surprisingly very popular when families are choosing a pup. If you are in the market for a puppy with a patch, be prepared to go on a waiting list. Having said that, you might be in with a chance to get a patched puppy because right from birth a breeder knows they cannot show this pup, so will find a home for it rather than keep it. Even though it is only a visible imperfection, a responsible breeder should not breed from a patched Dalmatian to help maintain the breed standard, as patched dogs will increase the chances of more patched pups, losing that classic coat spotting (and heading more towards the look of a Pointer). Having a patched Dalmatian gives a special character and they make the best family pets, even if they aren’t the perfect show dog.