Dalmatian Diet – What Are Purines

Purines are a chemical found within all living organisms and consumed by animals as a natural part of their diet. Associated with energy intake, high-purine containing foods are often also high-protein containing foods. It is therefore important to recognise the difference between the two in feeding a dog such as the Dalmatian, which still requires a balanced diet, but must be carefully monitored for purine levels. The Dalmatian is unable to process purines in the same way that other dogs do. A unique trait related to the genetic character of the breed, if purine levels are not managed, it can lead to urinary health issues or worse problems for the dog.

Purines are a chemical compound with a characteristic structure, made up of Carbon and Nitrogen atoms, and can be found in all living organisms. They are a part of the chemical makeup of the DNA of organisms as well as an important component in energy-providing biological molecules. For this reason, as a source of energy, many foods that are high in purines are also high in protein. High-purine associated foods are generally also high-protein containing foods.

Large quantities of Purines are not required in a dog’s diet. However, because of the common link between high-protein containing and high-purine containing foods, often there is confusion between the two. Consumption of proteins does not necessarily increase the risk of purine related health issues, as long as you are aware of which high protein-based foods are indeed also high in purine level. Restricting proteins from a dog’s diet entirely or severely just to rule out all purine intake would be very detrimental to the health and development of that animal. All dogs require protein, including Dalmatians, they just require a more considered approach to such dietary intake.

What role do purines have in an animal’s digestion?

The digestive and excretory systems work together to absorb, process and excrete purines in an animal’s body. The liver, intestines and kidneys break down purines to form uric acid, which is then excreted in urine. About a third of uric acid produced is due to breaking down purines from food that is digested. Therefore, eating a high purine diet has a higher level of uric acid production.

When purines are digested in an animal’s body, they are broken down and form uric acid. Most animals successfully digest purines and excrete this uric acid by converting it into a more soluble form (known as the chemical allontoin). Too many purines increases the amount of uric acid and this can subsequently build up in the body. If this uric acid is not excreted and remains in the body too long, it can form urate crystals and can lead to a number of health problems.

What causes an excess of purines?

All animals synthesize purines. There are a few different reasons why an abnormally large number of purines might build up in an animal’s body:

How do purines affect Dalmatians?

In primates and specifically Dalmatian dogs, uric acid uptake is significantly reduced. Other domestic animals create more soluble urates in the excretion process, whereas Dalmatians are known to have a metabolic defect inherent in the breed. A recessive genetic defect present in the breed causes them to excrete higher levels of uric acid, not being able to effectively process purines as far in the metabolic process as other dog breeds do. This genetic condition is known as hyperuricosuria: having the inability to convert uric acid.

Dogs which are unable to effectively process purines alternatively create higher levels of uric acid, which is excreted in their urine. This higher uric acid level builds up in the kidneys or bladder and potentially forms urate precipitates or crystals. Urate crystals can form larger or more solid urate stones. When solid urates form they can potentially block drainage and cause difficulties in urination, a condition known as Urolithiasis. Health risks to Dalmatians as to how they can be affected are shown below, although it is certainly hoped that before developing some of these more severe health problems the dog is taken to a veterinarian as soon as possible.

Why do purines affect Dalmatians?

This genetic defect has been known to affect the Dalmatian breed for a very long time. Although it is not only found in the Dalmatian breed exclusively, the percentage of Dalmatian dogs with this defect is understood to be so high that it has become easily labelled as the breed’s biggest problem.

Many argue that this genetic disorder is fixed within the Dalmatian breed, meaning that it is virtually impossible to find a Dalmatian that does not have this metabolic problem. It is therefore suggested that all Dalmatians are susceptible to urate stones if fed a high purine diet. It is not actually known whether every purebred Dalmatian indeed has the recessive genetic disorder. Many Dalmatians live their entire lives without forming any urate stones. Nonetheless, just as humans are susceptible to kidney stones from having a high-purine diet, so too is there a risk for Dalmatians doing the same, in fact, for Dalmatians it can be quite a common susceptibility.

Due to the anatomy differences between male and female dogs, male Dalmatians naturally are at much higher risk of stone formation and trouble associated with removing urate crystals than female Dalmatians are. Although, this doesn’t mean that getting a female Dalmatian and feeding it just anything won’t result in potential risks to their urinary health.

How to know if your Dalmatian’s health is affected by purines:

Whether you know your Dalmatian has an immediate family history of stone forming or not, it is really important to recognise this issue as a breed-specific concern and simply monitor and manage it right from the start. Just as with any breed-associated health problems, if you choose to be a Dalmatian owner, you must be aware of the risks and know how to manage them before they become potential problems.

Signs to look for that your Dalmatian might be at risk of stone forming or Urolithiasis include:

This last sign could suggest that the dog passed the stone that formed. Even if this is the case, being seen by the veterinarian is essential to still treat the problem and prevent further stone formation.

How to avoid the risks of health problems associated with a high purine level:

With about a third of uric acid produced linked to the processing of purines in an animal’s body, it is important to carefully monitor the purine intake of Dalmatians. Dalmatian’s are highly susceptible to urate crystals and associated health issues because they are unable to process purines in a normal fashion. This is a breed-associated genetic defect, which can be managed to prevent health risks for your Dalmatian. Many people just assume it will be fine and do not worry about their Dalmatian’s diet until something happens, or indeed don’t know about this metabolic defect. It is much easier to make a few minor changes to your dog’s diet from the start, to ensure a happy and healthy life for your Dalmatian. Click here for important information on dry dog food for your Dalmatian. 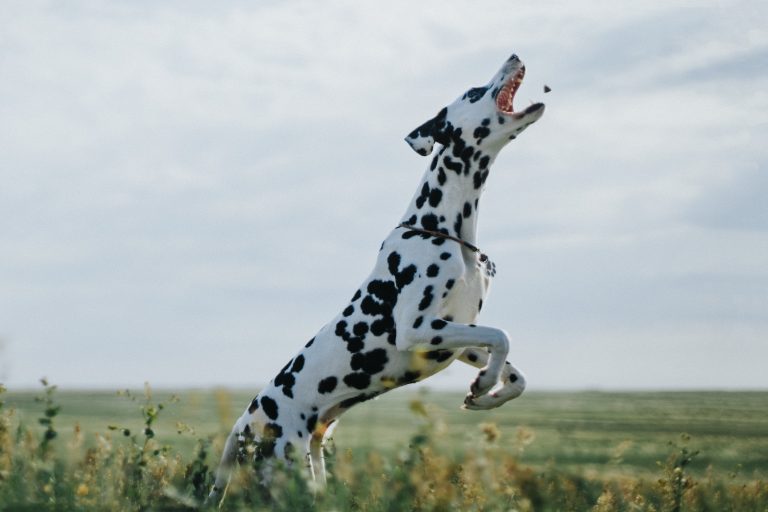 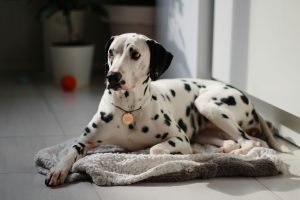 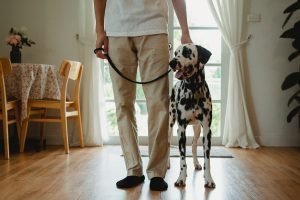 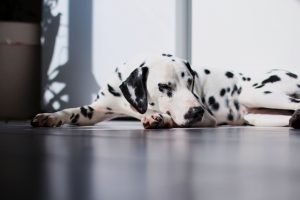