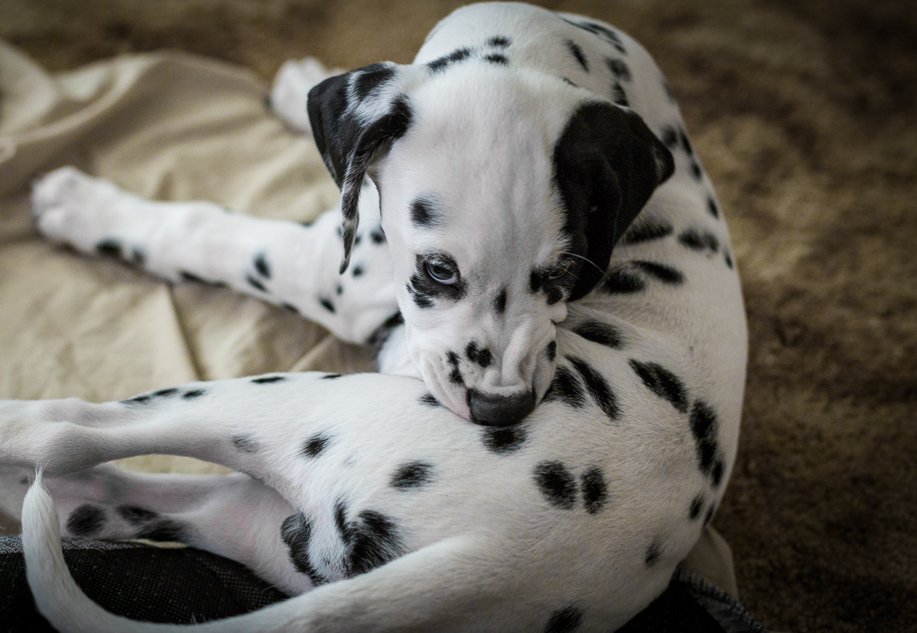 Just like any other dog breed, Dalmatians can show signs of aggression. This may be due to a number of factors such as:

Aggression in dogs comes in many different forms and is mostly a negative trait. Dalmatians are extremely loyal and protective meaning they can show aggression to strangers or other animals as a protective instinct. This type of aggression isn’t exactly a negative trait as a Dalmatian protecting its owner from danger is great…as long as it is an acceptable behaviour expected by the owner and controlled in the correct circumstances.

Aggression in dogs can come in many different forms and stems from many different scenarios, from poor breeding to poor training or potential mistreatment. Potentially aggressive tendencies can be in the form of:

Soft biting (or mouthing) is a natural instinct for most dogs as they use their mouths to investigate and/or play. Bite inhibition is the dogs ability to control how hard they bite and is a skill learnt from their mothers and the litter as young puppies. Dalmatians love to play and can play bite as a result of their extreme enthusiasm. As long as the Dalmatian is properly trained and has learned bite inhibition, playful mouthing or tug of war games shouldn’t be a problem. Remember to be careful of your fingers during a tug of war battle.

There are many reasons why an owner may not want their Dalmatian to play bite. Training is the key to stopping this behaviour by using positive reinforcement and stopping games such as tug of war and aggressive forms of playtime.

What to do if my Dalmatians starts showing aggressive behaviours

The answer to some or several of these questions may very well be yes, but that is not at all a reason to conclude that your Dalmatian is aggressive, it is simply some suggestions as to early warning signs that you might want to positively guide these behaviours back towards more desirable ones. Once early signs have been identified, it is best to then try to work out why this is happening:

Depending on the circumstances, what to do if your Dalmatian is showing aggressive tendencies could include the following:

The best advice is to commit to a good set of rules, be a positive leader for your dog and ask for help from your breeder, vet or a dog trainer early if you are concerned about any behaviours your Dalmatian is showing.

If you plan on purchasing your Dalmatian puppy, it is important to get them from a reputable and registered breeder. There are two things that may have a negative impact on temperament when breeding Dalmatians: inbred dogs and crossbred dogs.

Crossbreeding refers to breeding two different breeds and results in impure breeds of dogs. In some cases there is nothing wrong with a good old mutt or mix. In the case of the Dalmatian breed crossbreeding is not ideal. With temperament, crossbreeding tends to be accidental or at the very least not a careful and planned choice of parent dogs, lacking knowledge of each dog’s history and temperament as an individual animal and as a part of generations of a breed standard. The result is puppies that have not had careful consideration of the resulting temperament and are therefore a risk which may create potentially unstable temperaments. Crossbreeding is a disservice to maintaining the quality of the Dalmatian breed, temperament or otherwise.

Inbreeding is a much more serious issue for a breed. Inbreeding is the result of a lack of diversity in breeding, by breeding dogs that are closely related to each other (for example, brother bred with sister or son bred with mother). It seems ridiculous this would even happen but unfortunately does with some irresponsible breeders, who suggest it is in an effort to maintain purity of the breed. The harm it does on a genetic level far outweighs any suggested benefit gained from breed purity.

Inbreeding can significantly increase the risk of inheriting genetic disorders because those traits are found in both parent dogs, having the same family genes, effectively doubling the risk of passing it on to a pup. Temperament is known to have a genetic link, and although not clearly understood, inbreeding definitely increases the risk of aggression and associated temperamental disorders that result in aggression (like schizophrenia, for example). It is critical to be careful in selecting a Dalmatian puppy, all breeders if asked should happily and freely provide a pedigree going back at least two generations if you ask.

Choosing a responsible breeder who is open about breeding history is key. Another critical way to ensure your dog has been carefully bred to give it the best chance at having a good temperament is to ask to meet the pup’s parents (the mother at least should be there). Ultimately, selecting good natured parents helps to reduce potential aggression in the pup and therefore the Dalmatian breed as a whole.

Dalmatians are very independent thinkers which can make them quite stubborn. Dalmatians can be manipulative and dominating because of this independent thinking as well as their boundless energy. They will constantly test your authority and require strong leadership to keep them in line. If strong leadership is lacking in the relationship between pet and owner, a Dalmatian can start to take charge, which can lead to aggressive behaviours developing. Show your Dalmatian who’s boss consistently and be stubborn yourself during training and playtime.

Dalmatians are extremely loyal and can be quite territorial which makes them great guard dogs. It is primarily what they were bred for. They will protect their owners and land from strangers and other animals, which can lead to creating a form of aggression.

This guarding and protecting instinct only becomes a problem with poorly trained or poorly socialised dogs. A Dalmatian needs to understand that strangers and other animals aren’t always a threat, even when stepping foot on your property. Early training and socialisation helps Dalmatians understand when it’s okay to use these protective instincts making it easier to protect your mailman as your Dalmatian grows up.

As a puppy, right from birth a pecking order begins as pups scrap for the best spot and the most food. When solid foods are introduced by the breeder, this protectiveness of one’s food increases again. Depending on your Dalmatian’s position held in the litter’s pecking order, your pup may come with different levels of protectiveness around food. It is simply important right from day one to be clear about the rules in their new home, so any protective behaviours don’t turn into food related anxieties, resulting in potential aggression over food. The following are some strategies to help prevent food aggression developing:

Although breeding can have an impact on temperaments, training and treatment can have a more significant impact on whether a Dalmatian shows aggressive tendencies or not. Training a Dalmatian needs to start early and be consistent to help them channel their independent thinking and boundless energy into good and non-destructive behaviours. Dalmatians can be harder to train because of their independent thinking and stubborn personalities, but they absolutely love food and will definitely perform for a treat.

Dalmatians are extremely loving and loyal to their owners. They are smart dogs and will remember any mistreatment for years to come. How a Dalmatian is treated early in its life will have a large impact on its behaviours as it becomes an adult. This is particularly important if purchasing an older Dalmatian through adoption or the pound.

History of your Dalmatian

After birth the mother will show her puppies she is the boss and will discipline any naughty behaviour, such as biting. Any puppy taken away from the litter too early (before 8 weeks) may have missed out on these necessary lessons leading to problems with aggression and biting. This then transfers to the new owner of the puppy, they must show the Dalmatian puppy who the alpha is and provide them with strong leadership and implement proper training practices to help fine tune overall temperament.

If you purchase a puppy Dalmatian at around 8-10 weeks old you basically know the history of the dog as it grows. If your Dalmatian develops aggressive tendencies as it grows chances are it’s due to lack of training, leadership and/or poor treatment. Leaving a Dalmatian alone consistently for long periods of time, for example, falls under poor treatment.

If purchasing an older Dalmatian through adoption or from the pound, you won’t know the history of the dog. If it’s up for adoption or at the pound, the probability of mistreatment is high. Aggressive tendencies can be ingrained in the dogs behaviour because of this. This means the new owner needs to be willing to retrain and be super patient with the animal until new and more acceptable behaviours can be established. Rescue shelters are very willing to help owners transition your dog into it’s new home and give suggestions how to curb negative behaviours before they become problematic.

Dalmatians are extremely energetic dogs so they need lots of exercise. A daily exercise routine is paramount and any skipped days are instantly noticed in the dogs behaviour. A Dalmatian can run all day so during daily walks some off lead running time is highly recommended. A build up of energy without release is a recipe for destructive and potentially aggressive behaviour.

As well as requiring plenty of physical exercise, Dalmatians require plenty of mental stimulation in the form of playtime games and lots of cuddles and talking. A Dalmatian without mental stimulation can become bored and destructive, especially if left alone consistently for long periods of time. Destructive behaviour is a catalyst for aggression and needs to be corrected immediately.

Particularly with males, if you do not neuter your dog, there will be instances where aggression is shown to other dogs. This again shows the importance of properly socialising your dog from a young age, to learn acceptable behaviours. However, it is just likely that two male adult dogs that haven’t been neutered will be aggressive towards each other, especially with females around. Don’t force your Dalmatian to be friends with every single dog out there, there will be dogs that just don’t get along, it happens. If you have chosen not to neuter your dog (assuming for breeding purposes) then accept that you may have to be more careful in socialising your Dal to avoid fights with other dogs. Similarly, if you have a bitch on heat do not socialise it at the park, it will cause issues with other people’s dogs and potentially wind up with unplanned puppies. If you know your Dalmatian is not going to be bred by the breeder, then it is easier to get them neutered to avoid aggression between competing males, it’s a logical and responsible decision.

Dalmatians can be aggressive just like any other dog breed, but it is not a common stand alone trait found in a Dalmatians temperament. A dalmatian raised with love, care and the correct training has a very low chance of being an aggressive animal.